Sand, Surf and Segregation: A Fight for Civil Rights in St. Augustine, Florida

An article on Purcell Conway

“Purcell, you can’t get arrested. I don’t want you to get arrested.” Purcell Conway was accustomed to his mother’s frequent plea. At 16, he was a determined civil rights activist — publicly standing against the racial injustice that defined life in 1950s St. Augustine, Fla. His mother knew the dangers that nonviolent civil disobedience carried in the Jim Crow South, and grew concerned over his involvement in the movement.

Despite the known risks, Conway recognized that inaction could subject him to a lifetime of injustice — a destiny he was unwilling to accept.

Conway was born into an America where the wheels of the civil rights movement were just beginning to turn. Raised in St. Augustine’s historically Black West Augustine and Lincolnville neighborhoods, his childhood memories include several watershed moments: the murder of Emmett Till, the arrest of Rosa Parks, the 16th Street Baptist Church bombing, and the terrorizing of a prominent neighbor. Meanwhile, a sit-in protest at the local Woolworth's lunch counter ended in the arrest and imprisonment of nine Black teens and seven children. Four of the children were incarcerated for six months and came to be known as "the St. Augustine Four." Two of those children were Conway’s classmates.

But there were covert acts of discrimination, too. As a child, Conway would ask his mother why she addressed white people as “Mister” or “Miss,” yet they always called her by her first name. Conway shared that whenever he asked his mother these questions, she would tell him to “leave it alone.”

When Conway’s white neighbor offered him a sandwich and served it to him on the floor — next to a dog’s food bowl — both Conway and his mother decided to act.

Conway realized that what he was experiencing was more than just a movement — it was an opportunity to secure a better future.

“[For me], fear had nothing to do with it. I’m thinking about [my future] … kids I may have or a wife I may marry, and most of my friends felt the same. We were going to challenge the system and were not going to stop demonstrating until we got some resolution.”

Conway began meeting with students from Ford Memorial College to discuss the civil rights movement and work out a plan to demonstrate in groups. In the summer of 1964, Dr. Martin Luther King Jr. and the Southern Christian Leadership Conference (SCLC) organized and led evening marches to St. Augustine’s Old Slave Market, often facing counter demonstrations by the Ku Klux Klan and encountering violence that garnered media attention. Weeks before the Civil Rights Act of 1964 was signed into law, King and the Rev. Ralph Abernathy were arrested while trying to have lunch at the segregated Monson Motor Lodge restaurant. 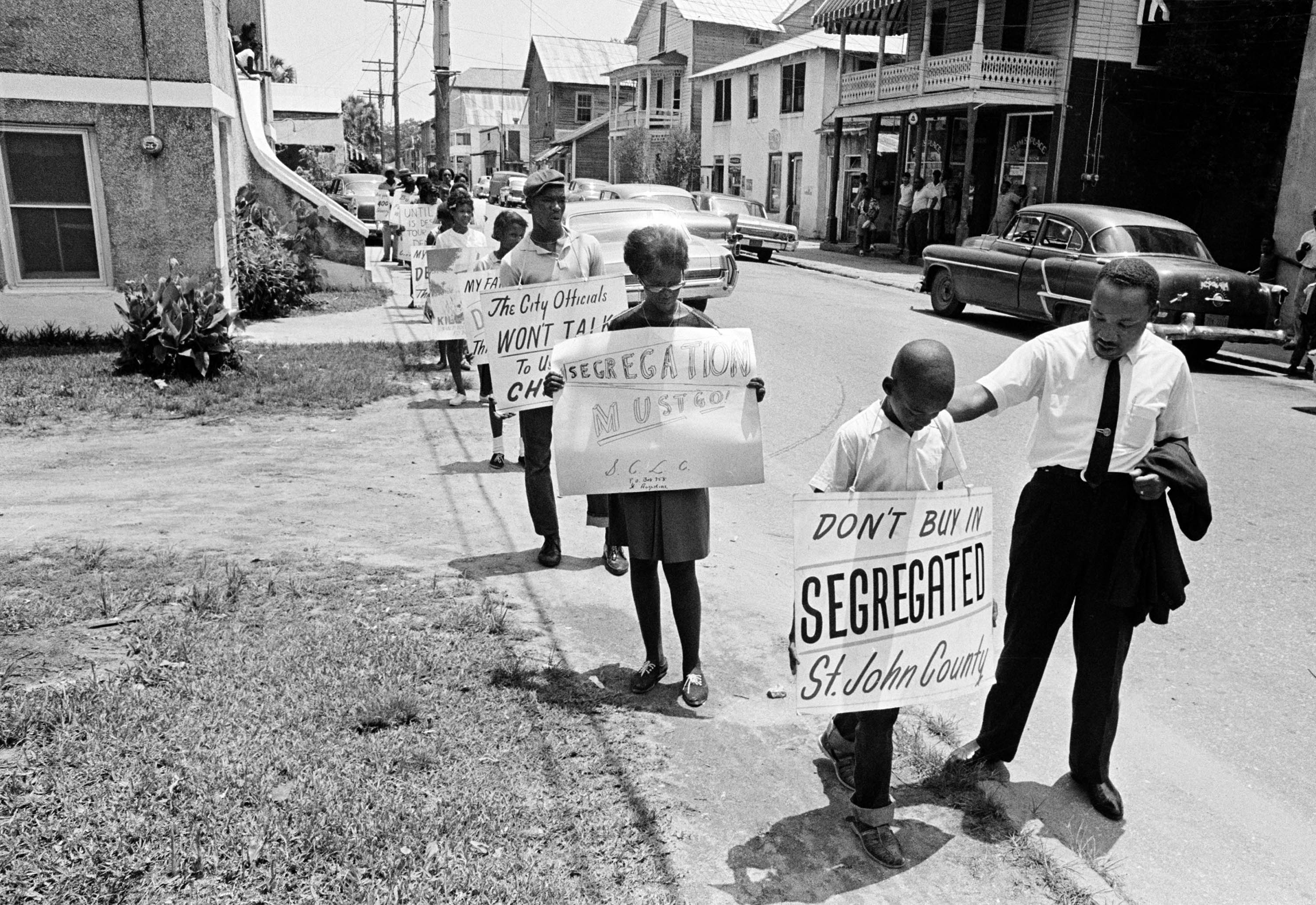 “Many in the Black community called [Dr. Martin Luther King Jr., Andrew Young, and the Rev. Jesse Jackson] agitators,” Conway shared. “The agitators were the young folk who are being denied basic civil rights. We were the agitators. Dr. King and his entourage just brought focus to that.”

In June of 1964, Conway and four friends joined civil rights activist Al Lingo and other nonviolent demonstrators to integrate St. Augustine Beach as one of many “wade-ins” taking place at the city’s segregated pools and beaches. Before long, Conway and his fellow demonstrators were surrounded by those who wanted to keep the sand and surf segregated.

“We were in the water maybe five minutes before this huge crowd started approaching us from the north and south,” Conway recalled.

Conway and his friends watched as mounting numbers of counterprotestors approached, waving Confederate flags and threatening the demonstrators. Lingo turned to Conway, and recommended they leave before things got “out of hand.” Conway’s group attempted to escape to their car, but they were quickly encircled.

“They're threatening and stating they gonna throw us in the ocean,” Conway shared. “They brought these … weights that they said they were going to wrap around our legs and our waists and take us as far out into the surf as they can and throw us and drop us.”

A white boy Conway recognized from town approached him and punched Conway in the face with brass knuckles, splitting his lip. Lingo stood behind Conway and encouraged him to “stand your ground.” Moments later, Lingo collapsed after being struck over the head with a pipe. State troopers were called in to disperse the segregationists and allow the wade-in demonstration to peacefully continue. Conway and his friends watched from the beach as violence between the troopers and the white mob ensued.

“Now, I'm really confused. I cannot understand these white men fighting other white men for my rights. [The state troopers] beat the Klan and their sympathizers into submission.” By the time the troopers informed Conway and his friends that it was safe to go in the water, the surf was red with blood.

Despite having been legally desegregated, attempts to keep Black community members away from public pools and beaches persisted. However, the wade-in campaigns that Conway and other activists joined, despite threats of violence, raised awareness and influenced demonstrations nationwide.

From the violence along the shores of St. Augustine Beach to painful memories of humiliation and discrimination in his youth, Conway still thinks back to his mother’s plea not to get arrested as he ventured out to demonstrate. Conway recalled that his entire family — mother, father, and three brothers — once sat in jail at the same time. Nevertheless, Conway understood progress came at a cost, and equality was, and is, worth the struggle.

Conway reflected on the culmination of the St. Augustine movement, among others: the passage of the Civil Rights Act of 1964.

“The Civil Rights Act is passed. Many thought that was the end of it. All right, we won, that’s the end of it. Not so. People need to continue to step up and make their voices heard. … It will change the way this country is for the better.”

Comcast NBCUniversal’s Voices of the Civil Rights Movement platform honors the legacy and impact of America’s civil rights champions. Watch Purcell Conway’s interview, and more than 18 hours of firsthand accounts and historical moments, online and on Xfinity On Demand.