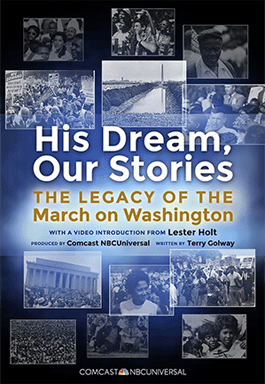 Excellent book! This book was easy reading and very informative in nature and context. Straight to the point and detailed.

He’s my hero. The book is so fun to read

It details the civil rights movement and the enhanced version has videos and eyewitness accounts of events. Totally worth it.

Everyone should take pause and absorb the meaning behind these stories. Amazing accounts of one of the most significant times in our country’s history.

What a great man, there are not enough words to describe how inspiring his speeches are to this day. I loved the stories in here, even though there was a lot of suffering in their lives

If you want to experience what it was like for these courageous citizens who changed the world, read this book.

“HIS DREAM, OUR STORIES” E-BOOK

To celebrate the 50th anniversary of the March on Washington for Jobs and Freedom and Dr. Martin Luther King Jr.’s historic “I Have a Dream” speech, Comcast NBCUniversal produced the award-winning “His Dream, Our Stories” e-book.

King and Roy Wilkins discuss their planned March on Washington on "Meet the Press,"August 1963.

Read the e-book online, or download an enhanced version for free through Apple iBooks, Barnes & Noble, Google Play or the Kindle Store.

Written by acclaimed journalist and historian Terry Golway, “His Dream, Our Stories” has been recognized with multiple awards, including a 2014 QED Seal of Approval, a 2014 Kirkus Starred Review, a Gold Benjamin Franklin Digital Award and eLit Awards Gold and Bronze Medals.